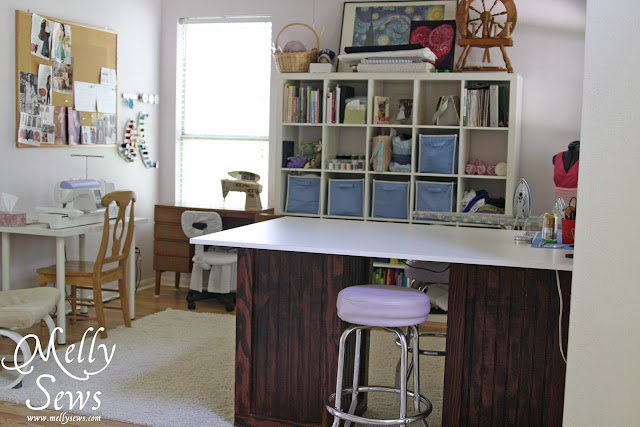 My sewing room has undergone a little makeover. If you remember from this post, it used to look like this 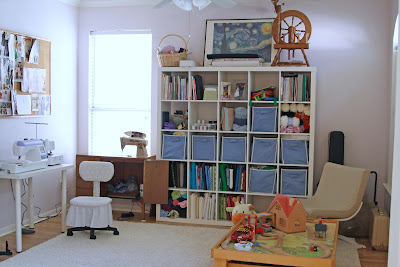 Well, the big news is that…
I quit my teaching job!

Yup, this year I’m going to be a work at home mom (and a HUGE thank you to all of you who have been buying the patterns that make this possible!). After teaching for 12 years, and doing it with kids for the last 4, and feeling like I’m miserably failing at the mom/work/life balance it’s time to try something else. And with the current war on teachers (yes, I’m calling it that – the rhetoric in the media and this country right now is that extreme) it seemed like a good time to bow out.

So, since I am officially working from home, I needed an official work space. Hence my new studio.

It’s really not that different from my old sewing space. First, we took the leaf out of the dining room table where I used to do my cutting, and put the table against the wall, allowing us to move the boys’ playstuff out of the sewing room (we only use this table to eat when the whole extended family is over). 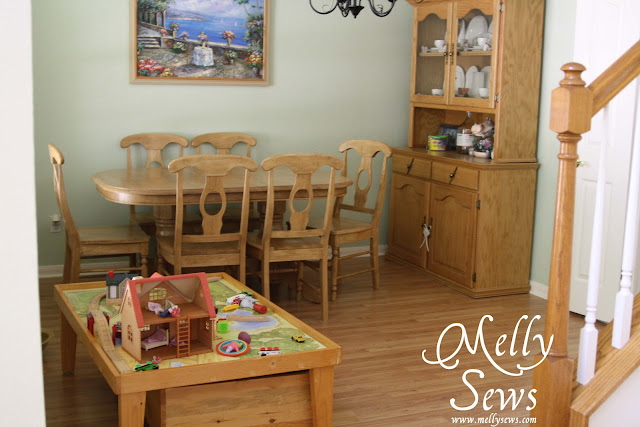 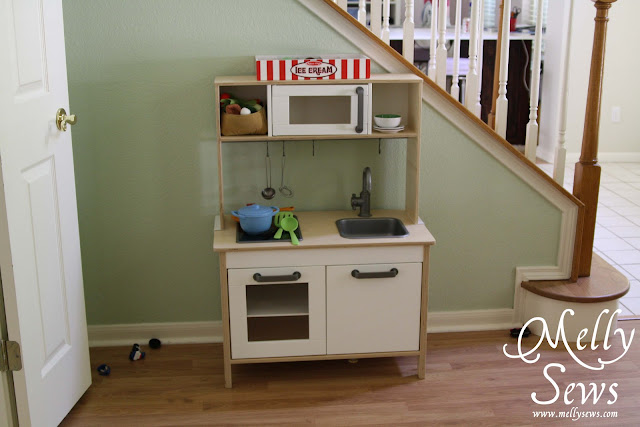 And then we went to the Habitat for Humanity ReStore  where I found these matching cabinets for $45 each. 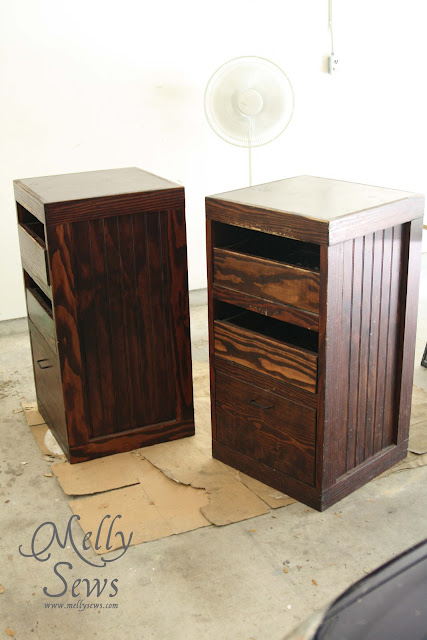 They were matching, had 3 drawers each, and those cool beadboard sides, so they don’t have that wall side that most cabinets have that isn’t pretty.

The only drawback was that they were a few inches taller than I wanted, but Hubby and I took a good look at them and figured out how we could modify.

First, he pried the nails and took off the tops. 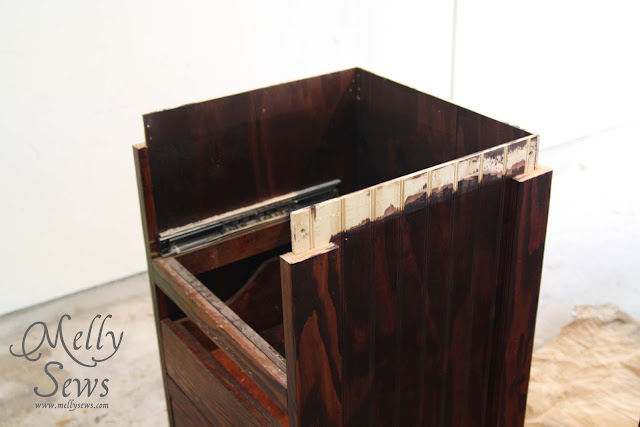 Then  he cut off the extra beadboard, so the tops were flush again. 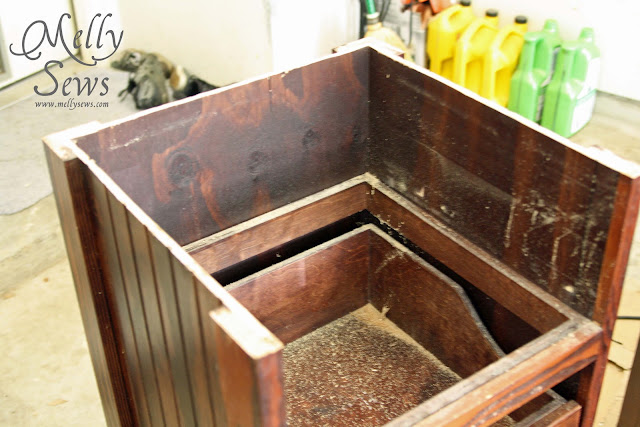 I bought a 4’x8′ sheet of melamine at Home Depot because I knew I wanted a white top, and melamine is easy to clean and hard to scratch – perfect for pinning. But I didn’t want the whole 4’x8′, so I had Hubby cut it down to 30″x6′. 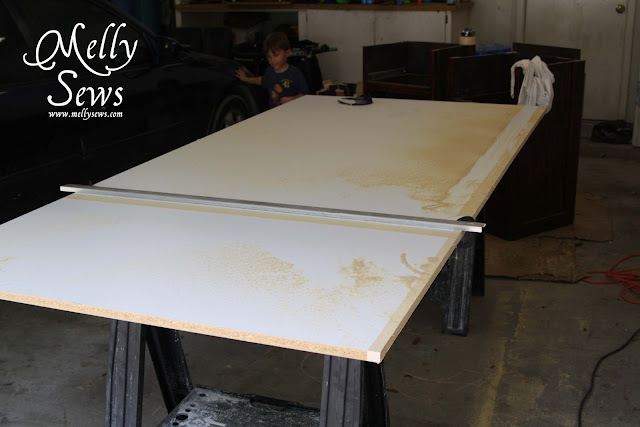 Or at least I thought Hubby did – I discovered when I uploaded the pictures that he had some help. 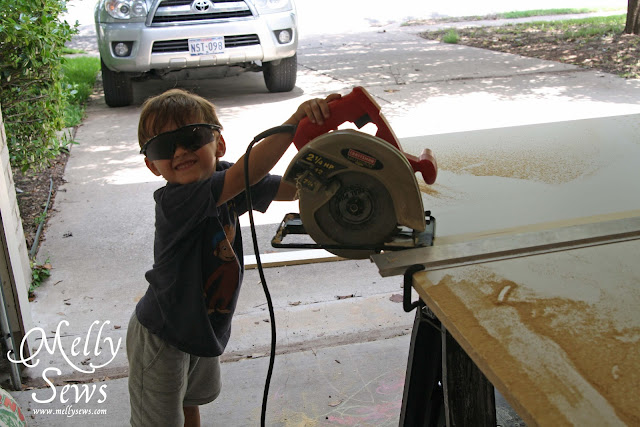 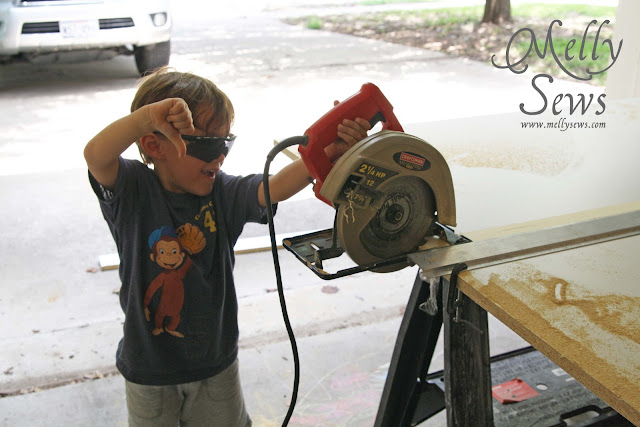 (OK, Tater didn’t really cut anything. But apparently he did vacuum all the sawdust.) 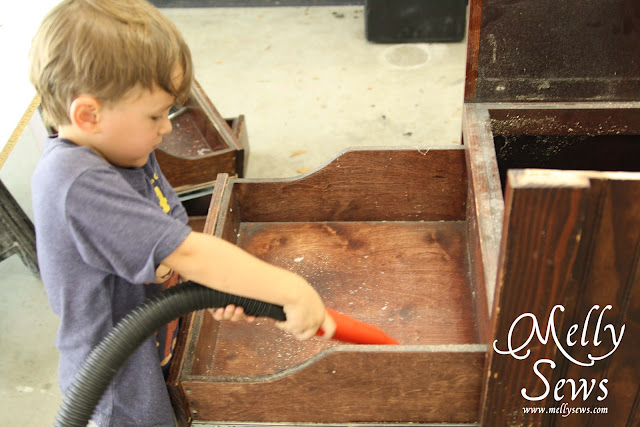 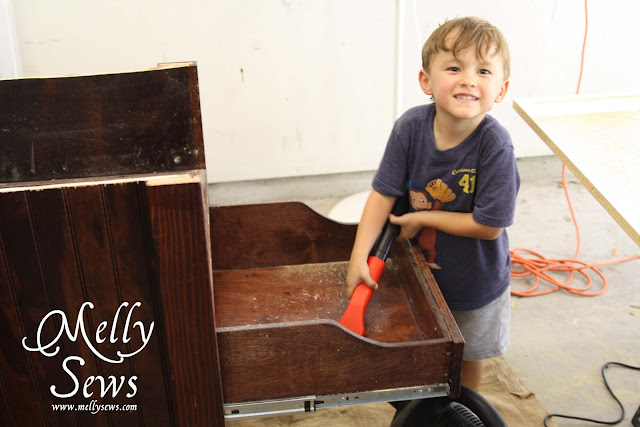 And now I have this beautiful expanse to cut on 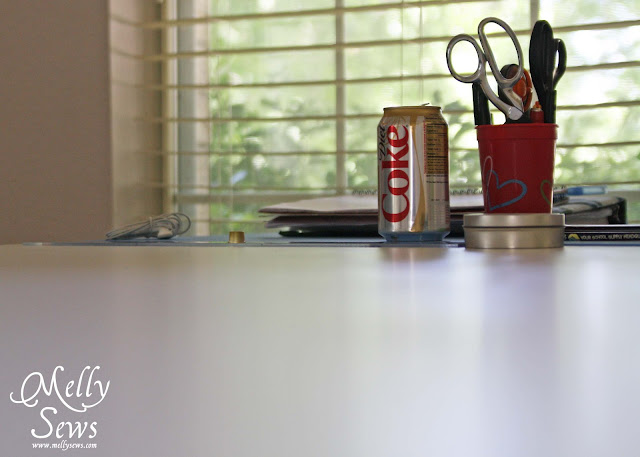 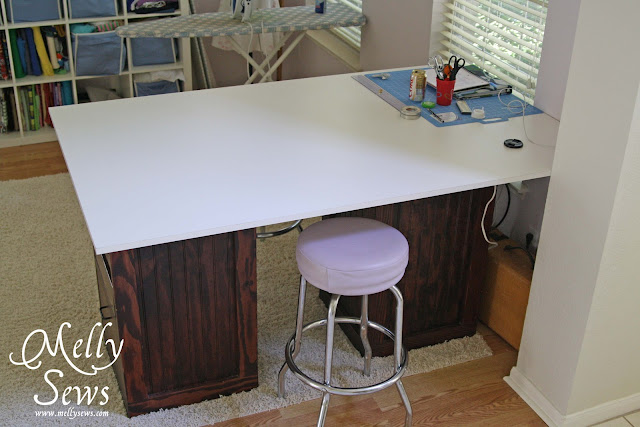 These super cool stools were a craigslist purchase – $30 for the pair. 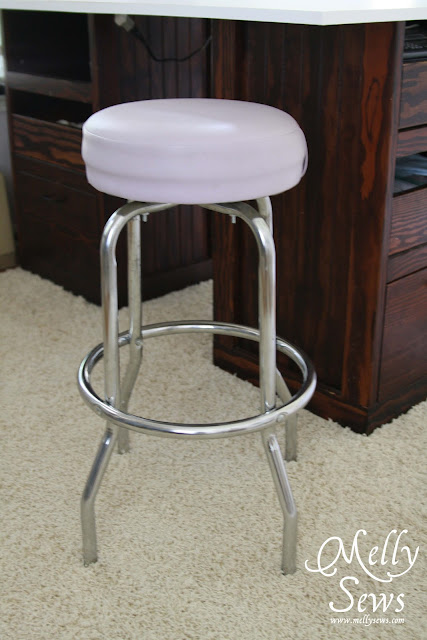 And all the sewing supplies that used to be in my china cabinet are conveniently housed in the drawers; as well as my printer/scanner for when I’m working on patterns. 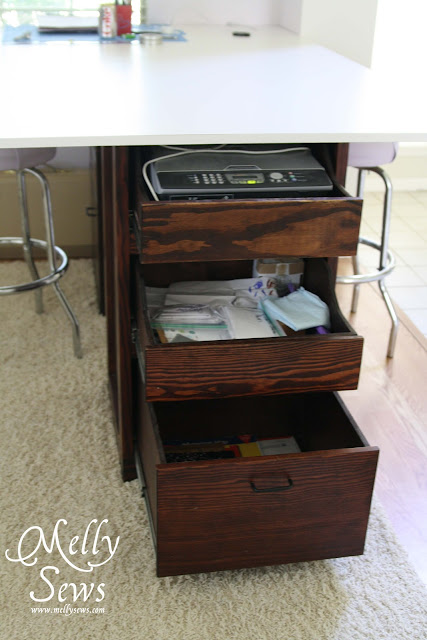 I rearranged the other furniture that was in the room, and added a rack to the wall for hanging works in progress – which is also handy for taking pictures; though I’m thinking about painting this wall white for that purpose. 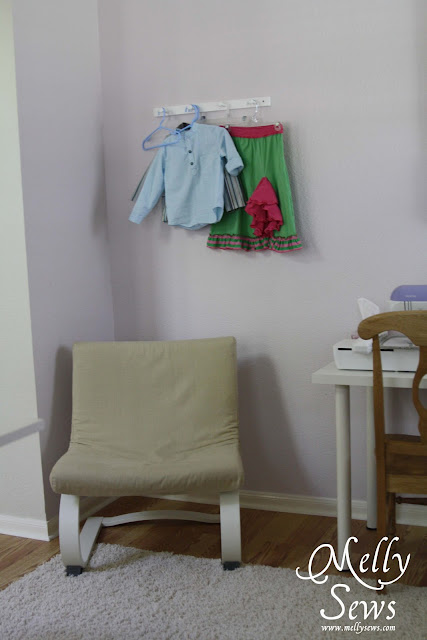 And Molly the Mannequin is now comfortable behind the ironing board. 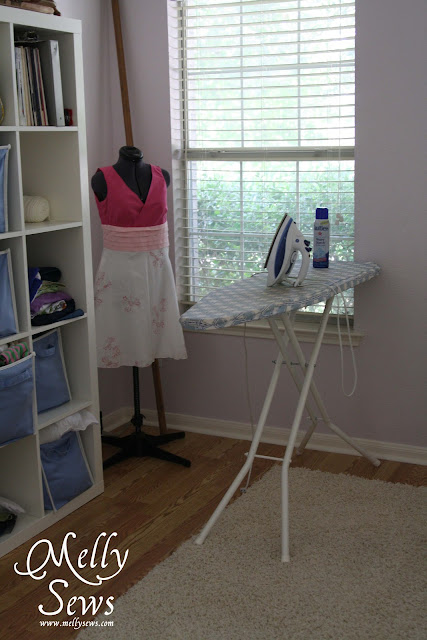 But though it’s not their playroom anymore, the boys still like to hang out. 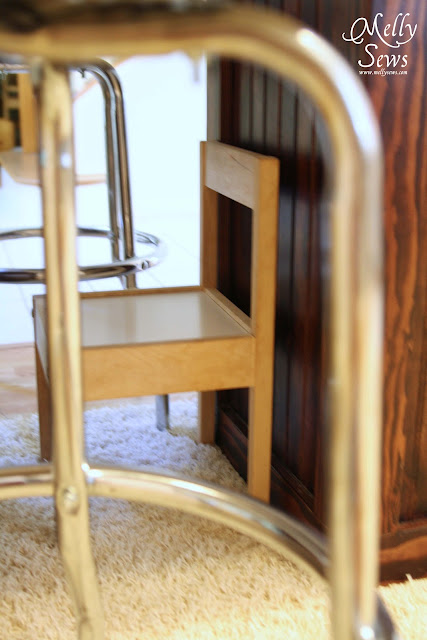 Sometimes under the table.

And sometimes at the table (where they decided they want to learn to sew). 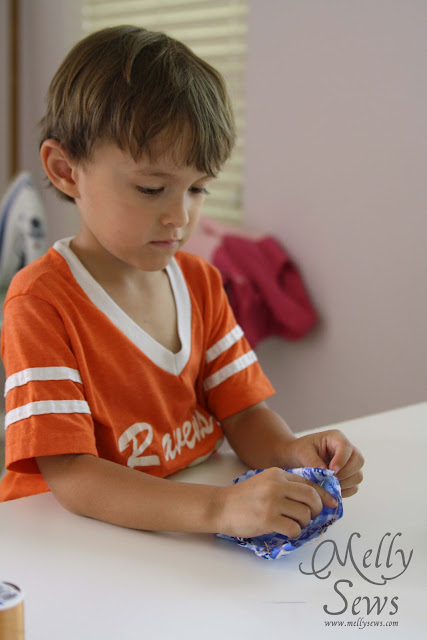 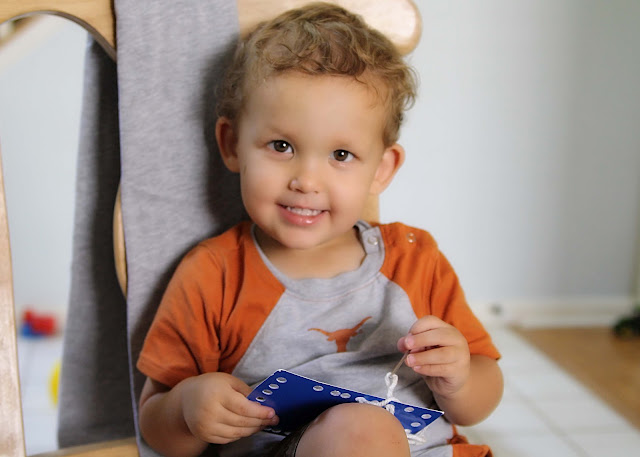 I think that I’m going to like these officemates (despite their sometimes tendency towards wrestling around on the floor in the middle of my studio).

So, any work at home mom tips I should know about?