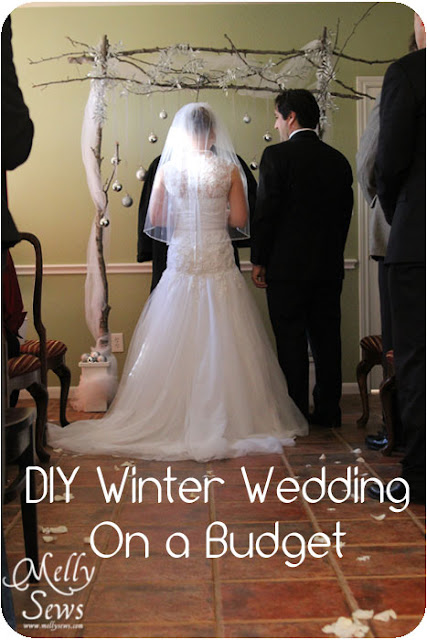 Just before Thanksgiving, I was over at my parents’ house for dinner. My mom informed us that my cousin and his fiancee had FINALLY decided on a wedding date: 12-12-12. They were going to go to the courthouse during their lunch break and seal the deal, and then we would all go out to dinner that evening. In Houston. Two hours away.

Well, I looked across the table at my sisters-in-law, and we shook our heads. This would not do.

I called the lovely bride and offered to throw her a wedding at my parents’ house.

It took some convincing – first that we would actually be happy to do it, and next that they could work out the logistics for everyone to make it for the wedding. But in the end I managed to persuade the bride that if you ever wanted a family to throw a wedding, our family was the one you wanted to do it.

You see, my parents have a gorgeous house. One of my sisters-in-law shares a bent for crafting with me. My mom is actually a great cake decorator. My other sister-in-law is getting to be a pretty good photographer. I’m not too shabby at photographs myself. My middle brother is a musical genius and provided the music.

Also, I’m bossy and I didn’t want to drive to Houston with my boys. Short of drugging them, that would probably be a miserable trip.

So, the bride got an officiant lined up, bought her dress and she and the groom got their rings and marriage certificate. Her now sister-in-law made dinner reservations and favors (from Baltimore. While 10 months pregnant, and mommying her two older girls. Unfortunately she didn’t get to come to the wedding as she had a 5 day old baby. But seriously. She’s amazing.).

And the bride left everything else up to us! What trust! What free reign!

In conversation we quickly decided that the best way not to spend fistfuls of dollars on this wedding was to elaborate on Christmas decorations that would already be up and/or readily available on sale. Fortunately, the bride, a native of Finland, was amenable to a winter white themed wedding. So we had our colors – silver, white and sparkle.

The first order of business for us was to create a Pinterest board. Which involved my sister-in-law and I explaining Pinterest to the bride (she’s a research scientist, not a crafter) and my mom (who is a crafter but maybe not as internet savvy).

The next thing was to construct some kind of altar or backdrop for the wedding, which took place in the dining room cleared of most of the furniture. So, for a grand total of $25, we assembled this 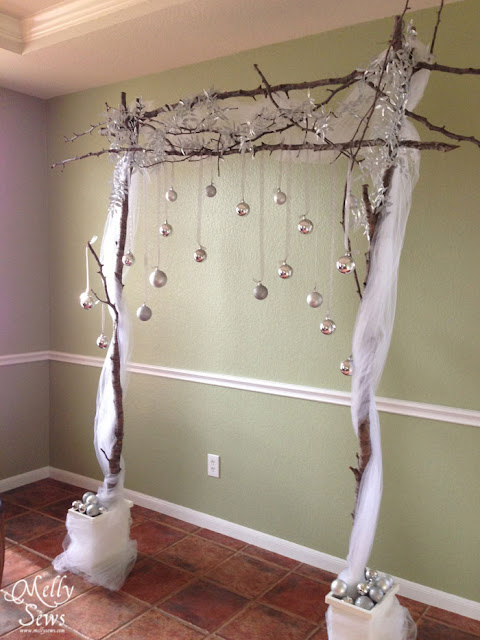 The branches were pruned off my Bradford pear trees a couple months ago, and had been sitting in the pasture where the goats kindly stripped them of their leaves. So they were free. 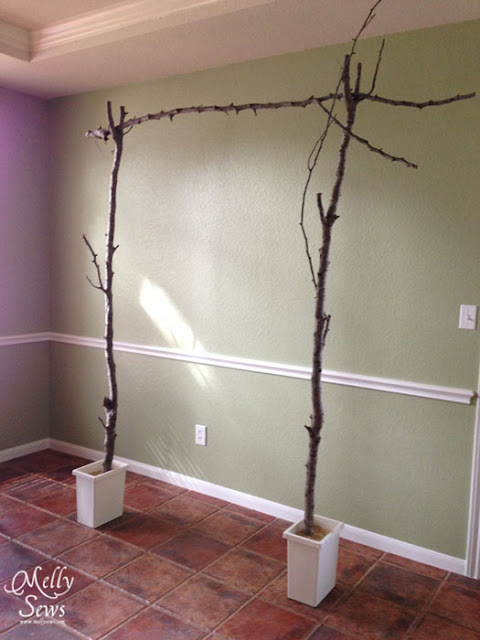 We had to add two screws to the cross branch hold things in place, but mostly we just worked with the natural forks in the branches. 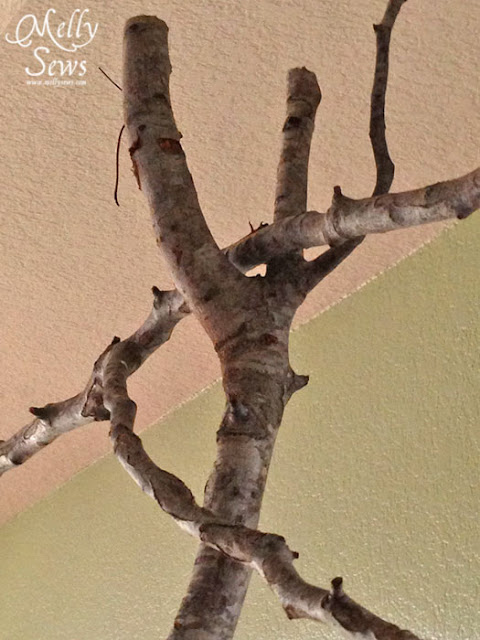 The buckets they’re sitting in are plastic trash cans from IKEA, which were $5 each. We filled them with sand from the kids sandbox (free). We used about 25 lbs of sand on each side. I held the branches level while Hubby poured the sand in. 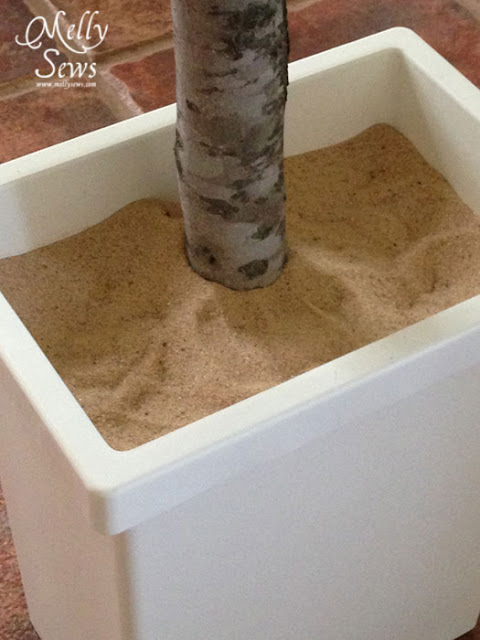 and then we topped them with Christmas ornaments (free) 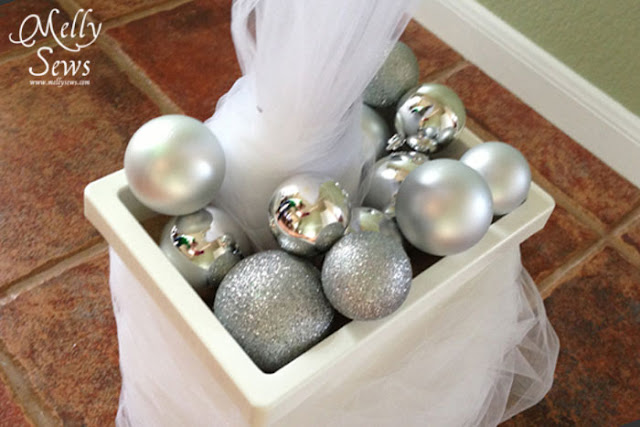 and some glittery silver leaf garland I bought at 50% off ($15 total). And the tulle was borrowed from my friend who saved it from her wedding, so it was also free. 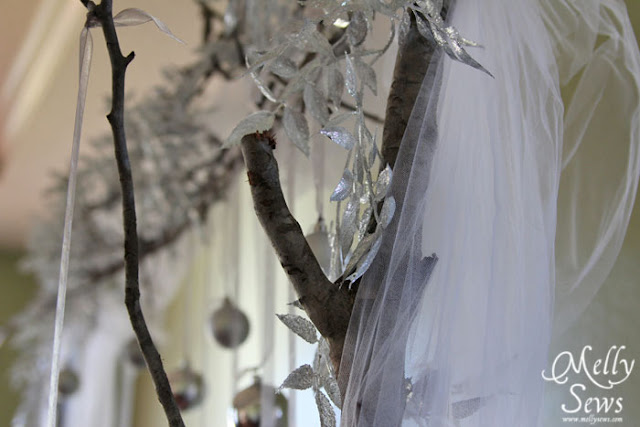 The room set up for the ceremony: 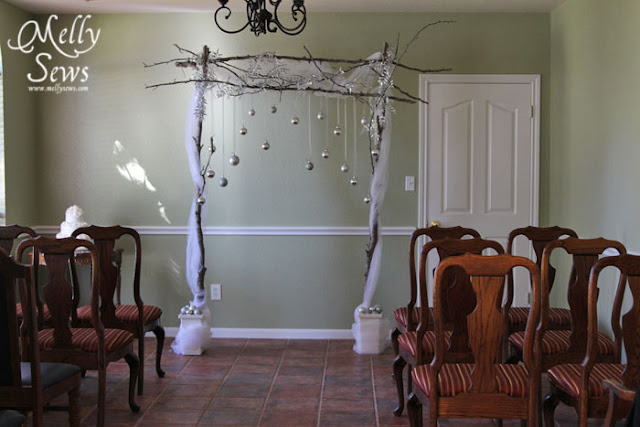 As I mentioned before, my mother baked and decorated the cake (Side note: she took cake decorating lessons when I was little and I insisted on a “wedding cake” for my 3rd birthday. So she made me a blue and yellow three tiered cake. In the pictures I’m standing up to blow out the candles and it’s almost as tall as I am) and did a gorgeous job. Also, it was delicious. I love the way fondant cakes look, but they just don’t taste as good as this. 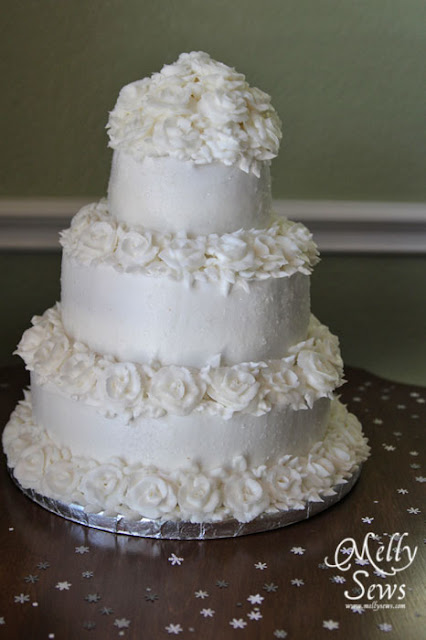 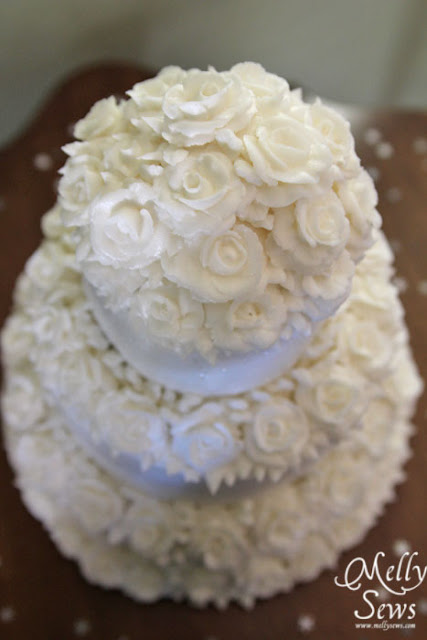 And my crafty sister-in-law made the bouquet with flowers purchased from the grocery store, while my other sister-in-law acted as the second photographer so she and I wouldn’t miss a thing. 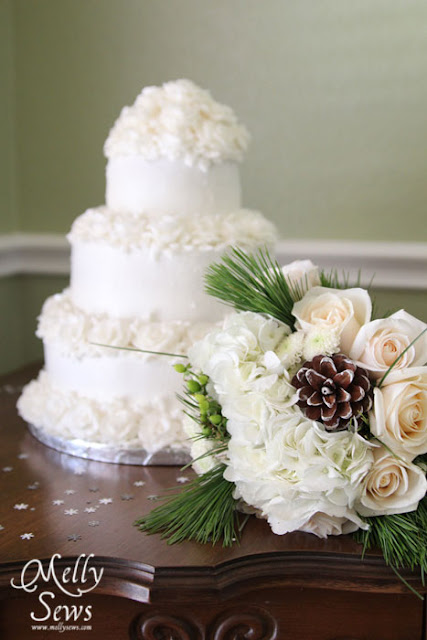 We also decorated the staircase with the borrowed tulle and, put up the lighted garland my mom already had, and added some silver ribbon and silver beaded Christmas garland. Total for the stairs was $15, bringing the decoration total to $40.
Here comes the bride. 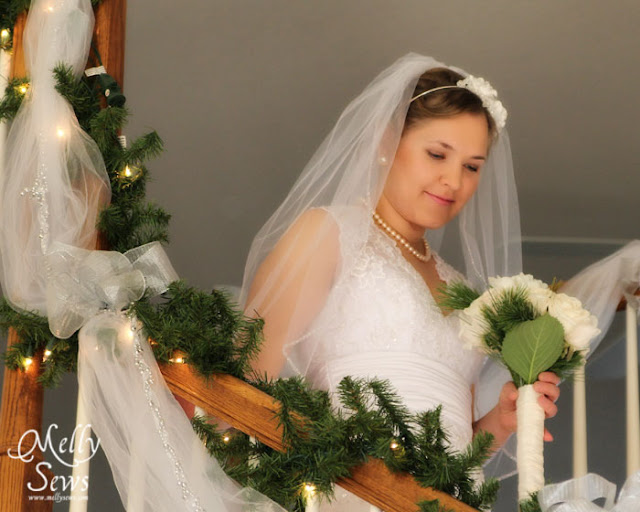 And my brother playing for her entrance (if you want to hear what he sounds like he actually released an album you can listen to on iTunes HERE). 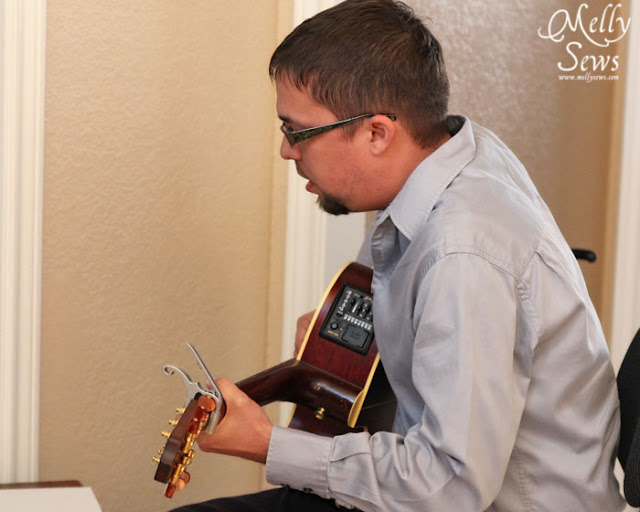 And the bride and groom. 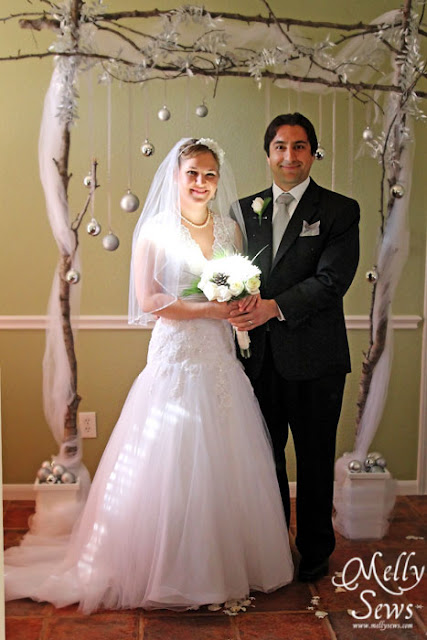 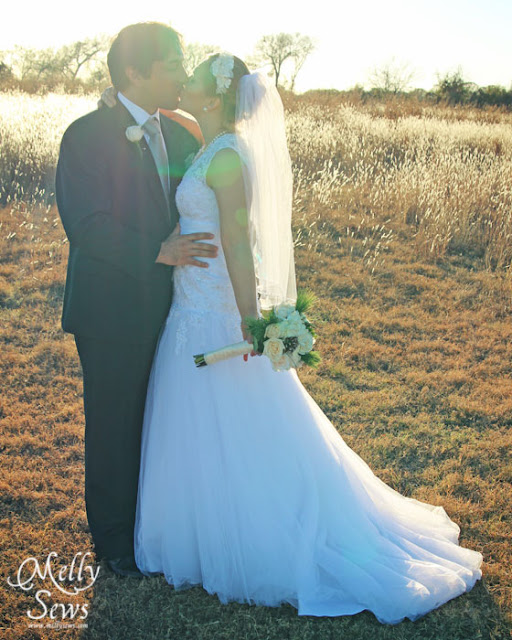 All in all, it was a crazy undertaking, but I am so glad we were able to give them this gift and celebrate a beautiful day. And when it was all said and done we joked about starting a family wedding business.