You are here: Home / Things I Love for Sewing

I get emails sometimes asking me to recommend tools, books and machines, so I’ve compiled my most common recommendations in one place. Please note that some of these are affiliate links, so should you decide to purchase through one of these links I get a small percentage of the sale. This is at no cost to you and helps support this site.

I sew on a Baby Lock Elizabeth machine and serge with a Baby Lock Imagine and a Baby Lock Triumph that  I la-la-love the Jet Air threading on those sergers!
I work with Baby Lock, so they provided the machines listed above to me. However, all my opinions of the machines were formed before I pursued Baby Lock to work together and after I test drove these and several other brands 🙂

I love that Jet-Air threading so much that I purchased the Baby Lock Cover Stitch for myself as well. This was before I had the Triumph, which also does cover stitching, but honestly I prefer switching between separate serger and cover stitch machines to converting one machine back and forth. If you have the means, that is my preference. Read more about the differences between a sewing machine, serger and cover stitch machine here.

Read more about my machines and where I sew here. 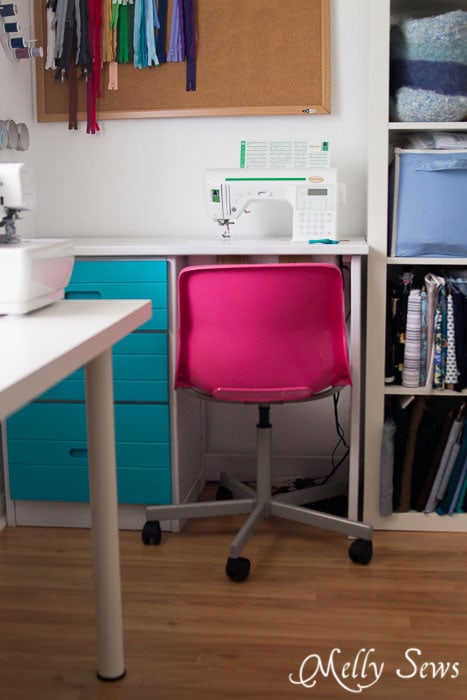 In addition to the basic sewing tools I recommend, here are some fun ones. I made a video showing how to use each of these, which you can watch below or on YouTube here.

You can buy these notions using the links below. Note: these are affiliate links, so I get a small percentage of any sales made through them at no cost to you. I appreciate your support of this site by using them!

(affililate link) is the book I referenced in high school where I started learning patternmaking. It’s funny to me that theatrical costume and fashion design pretend to be two separate areas (they were separate programs in different departments at my college) when they’re doing essentially the same thing from the same bones. Anyway, this book doesn’t teach drafting, but it does show you how to create historical costume shapes. So I would enlarge the patterns in this book, then fit those basic shapes based on patterns that fit the actors in question. I didn’t know it, but that meant that I was using store bought patterns as slopers – which you can totally do! I didn’t even know the word sloper, but I made a lot of costumes and this method worked.

are the best drafting books I’ve read and used. I’ve checked them out from the library, and now own the children’s wear one. I want to own all three (Christmas maybe?)

Helen Joseph Armstrong’s Patternmaking for Fashion Design  (affiliate link) is kind of like all the Aldrich books put together. There is a LOT of information in here. However, I don’t find her style as easy to understand as Aldrich’s. I think any of the Aldrich books are a great introduction and then it you want to continue, Armstrong’s book is the next level.

If you’re looking to sell patterns and need to grade them, see if there’s any way you can lay hands on Professional Pattern Grading for Women’s, Men’s, and Children’s Apparel (affililate link)

by Jack Handford. It’s out of print and in demand, so used copies go for hundreds, which I realized after I managed to grab a copy.

Sometimes you just need a general sewing reference. I own an older edition of The New Complete Guide to Sewing

(affililate link) – so old the binding is falling off. This new version also has home dec sewing, which I don’t think mine includes, so bonus!

And finally, the first drafing book I owned, How to Make Sewing Patterns

by Donald McCunn (affiliate link). This is not an easy to use book exactly, you cannot skip any steps, and the pictures/diagrams are not plentiful. BUT if you have a general idea about drafting, this book helped me get the most accurate slopers of myself that I’ve done, which I now use all the time. It does not include standard measurements or how to grade, this is strictly how to draft a custom sloper. But at around $20, it’s 1/4 or less of the price of  Patternmaking for Fashion Design (5th Edition) by Helen Joseph Armstrong

So there we go – books that I actually use and refer to. Hope you find them useful as well.

My main still photo camera is my Sony A7iii (affiliate link). This is a very recent purchase, but so far I’m really liking it, despite the learning curve in switching from Canon to Sony.

My backup camera is still my trusty old Canon T3i, and if you’re looking for a more affordable camera model, the current version (as of December 2018) is the Canon T7i (affiliate link).

Note: these are all affiliate links

On the Sony, I shoot primarily with the Zeiss 55mm 1.8 lens  I also bought the Sigma EF-E adapter  so I can use my Canon lenses with my Sony camera. My primarily used Canon lenses are the 35mm 1.4 and the 18-55 3.5-5.6 mm kit lens that came with my Canon. I realize that except for the 18-55mm kit lens, my primary lenses are not particularly affordable. So for more affordable options, I also have (and like) the Canon 24mm 2.8 lens and the Canon 40mm 2.8 lens, each of which are under $150 and also work (with the adapter) on my Sony camera. I actually prefer the 40mm lens to the “nifty 50” 50mm 1.8 lens that is often recommended for blogging. And before I got the 35mm 1.4 lens, my main lens was the Tamron 28-75mm 2.8, which is still a solid intermediate lens in my book. It costs a little more than getting the 24mm or 40mm, but it does give you much more zoom power.

Note: these are all affiliate links

My favorite accessory for photographing myself is this intervalometer. An intervalometer is like a wired remote that you can program to take a picture every interval. So what I do is program mine to take a picture every one or two seconds, put the camera on autofocus, hit start, and then go in front of the camera and continually pose. This gets me a lot of shots to choose from in a short amount of time. It’s also great for family photos when you want to be in the shot with your family. My biggest regret with my Sony is that the intervalometer doesn’t work with it, and I need to get a new one that does. Luckily intervalometers are much less expensive than cameras.