How to Finish Knit Necklines and Sew Knit Binding

Hey y’all, continuing the month of sewing with knits, today I want to talk about necklines and explain how to finish a t-shirt collar. Finishing a neckline can be the trickiest part of sewing knits, so today I have a video to show you 3 ways to do it – 2 ways to sew knit neckbands (out of rib knit or self fabric) and another option to bind the neckline.

So here’s the video that covers all of these methods. If it won’t load for some reason, you can also watch on YouTube here. And below the video I’ve got more written instructions.

The first thing you need to do for each of these methods is to sew your neckband or binding into a loop, right sides together, matching the short edges. Next, you’ll mark quarter points on the neckband and the neckline. So on the neckline, I use the shoulder seams as quarter points and also mark center front and center back (Note: using shoulder seams doesn’t work if your front neckline is significantly longer than the back – like a deep scoop or a V neck. In those cases you’ll actually want to measure the quarter points of the neckline). On the neckband, I first fold it with wrong sides together, then fold it (see video above) to mark the 4 points.

You can see my pin markers below on the first option, which is a rib knit neckline. If you’re not familiar with rib knit and why it’s particularly good for necklines, see this post on types of knit fabrics.

Now, sometimes you can’t find matching rib knit or you want to make a self fabric neckband. If your fabric has enough stretch (at least 30%, even more if you’re dealing with children’s or baby wear, because children and babies have tiny necks compared to their heads and need a lot of stretch in their necklines), this is another option. Most instructions I’ve seen for this have you cut a neckband on the cross grain; that is, with the stretch running horizontally across the neckband. This sometimes works well, and sometimes results in neckband gaping, so after much experimenting I prefer to cut my jersey neckbands on the bias if I have enough fabric to do so. This is part that will probably make more sense if you watch the video, but for those of you that prefer it, I’ll try to explain with pictures.

If you cut a neckband on the cross grain, the columns of knits stitches (represented by the black stripes below) remain in line from front to back. Because jersey knit doesn’t have the ribs of rib knit, the fabric wants to stretch at the same rate across each knit column. What this means is that as you stretch the outer edge of the neckband to fit the neckline, the inner edge won’t want to lay flat.

However, if you cut the neckband on the bias, each column of knit stitches forms a triangle when the neckband is folded. That means that for each point on the inner edge, the ends of that knit column are pulling in two different directions (shown by the pink lines above), which helps the bias cut neckband lay flatter along the curves of the neckline.

Finally, how to sew knit binding. The big difference between a neck binding and a neckband is that a band adds to the neckline height, while a binding does not, because it just wraps around existing fabric instead of extending beyond it. To sew, you’ll start with a quartered but unfolded neckband. I cut these on the crossgrain, because they’re generally not wider than 1/2″ when finished, so the gaping issue addressed by the bias band above isn’t as big a deal; there’s just not enough difference between the inner and outer curves of the binding to cause a problem. Sew the binding to neckline, using a stretch stitch.

Then, wrap the binding around the seam allowance, pinning in place, and stitch again, right next to (or even on) the seamline.

Cut the excess fabric off on the wrong side of the neckline, and your binding is complete.

Finally, how long should you make your neckband or neck binding? A good rule of thumb is to measure the neckline on the seamline and then cut a neckband that is 80-90% of that length plus seam allowances. I usually go with 85% to split the difference, then round up to the nearest quarter inch.

If you sew in your band or binding and your neckline is puckering a lot, your band/binding is too short. Now I say “a lot” because a small amount of puckering can usually be fixed with a good neckline pressing.  But the image below shows a lot, due to the fact that I eyeballed the binding instead of measuring.

On the flip side, if you sew in your band/binding and notice it’s not laying flat, especially if it wants to stand up at the shoulder edges, the band/binding is too long. Because knit fabrics can behave differently depending on exact structure and fiber content, sometimes even with a knit neckband or binding pattern you’ll need to adjust your neckline, so this is why I always pin knit necklines – it’s useful to give me a preview of the final product while it’s still easy to adjust neckband lengths.

Want to read more about sewing with knits? See these posts: 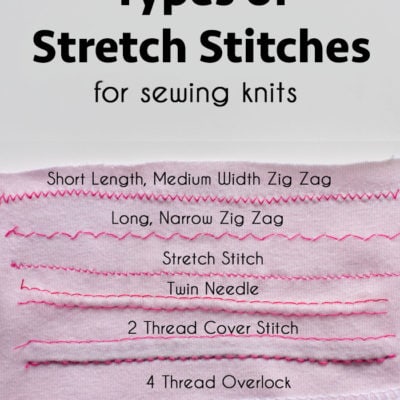 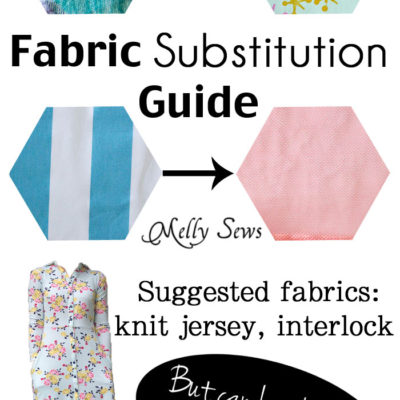 Guide to Fabric Substitutions – When can you switch fabrics? 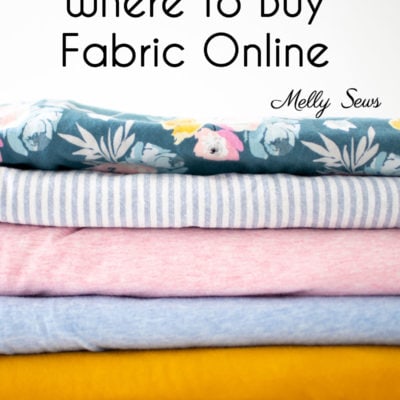 Great Online Fabric Stores – And What To Buy at Each 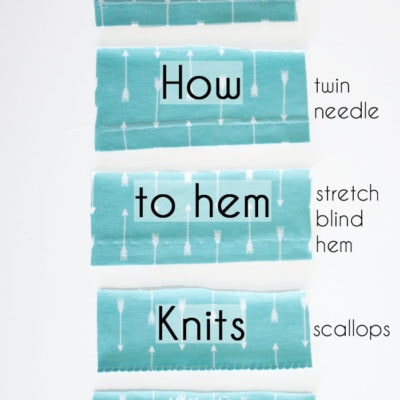 How to Hem Knits – Knit Hems 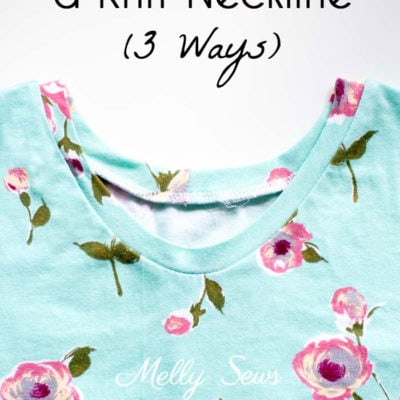 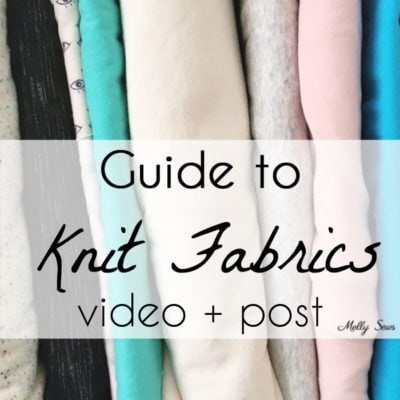 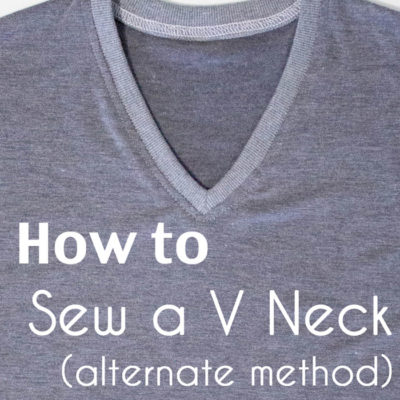 How to Sew a V Neck – Alternate Method 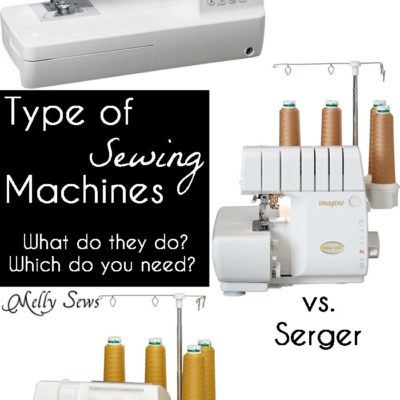 Sewing Machine vs Serger vs Coverstitch – What’s the Difference? 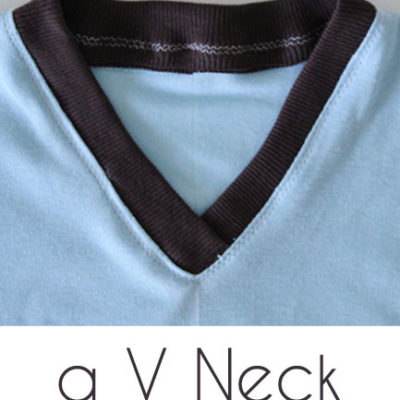 How to Sew a V Neck T-shirt 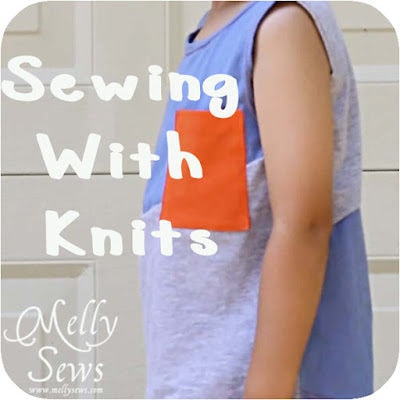