You are here: Home / Sewing Tips and Techniques / How to Sew a Zipper Fly 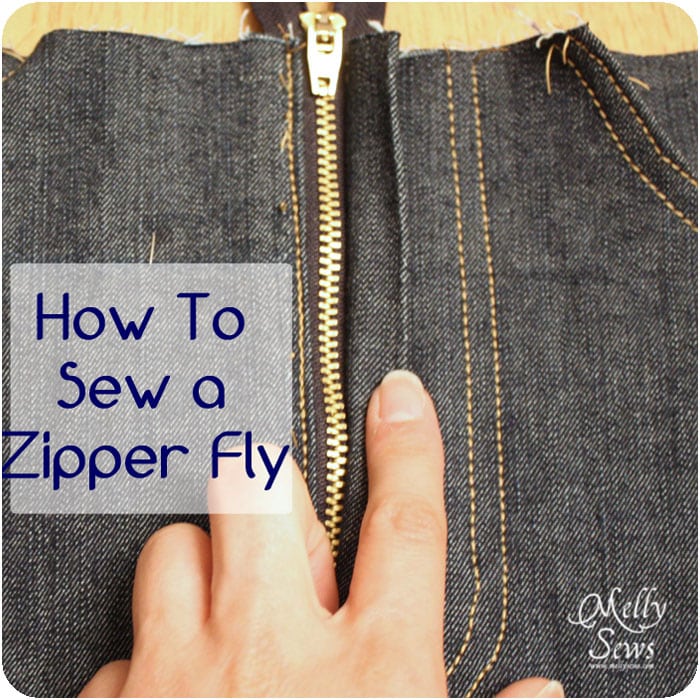 In this tutorial I’m going to show you how to sew in a zipper fly. Fly front openings are one of those things that always seem hard, and I often have to remind myself of the directions, but in reality it’s one of the easiest ways to install a zipper.

If you prefer a video tutorial on how to sew a zipper fly, scroll to the bottom of this post – I’ve got one of those too, and it’s for a pair of pants!

Start by finishing the edges of your fly extensions. You could use a serger, a faux overlock stitch or bias tape. Whatever you do, do it first, because you won’t be able to do so easily later.

I’m sewing a skirt (this one, in fact) but the directions are the same for pants. This will end up as a fly that opens on the right side -which is technically how men’s flys are done, but I see no reason to switch this for women – if you look at your jeans, they’re probably the same as your husbands. Left opening flys annoy me as a right – hander. So I guess if you’re left handed it might be useful to reverse these directions. Or weird. It’s up to you.

Next, I stitched the center front seam to the bottom of the fly area, backstitching where the fly would end. From that area to the top of the skirt, I switched to the longest stitch on my machine. And at the backstitch area I clipped to the seam. 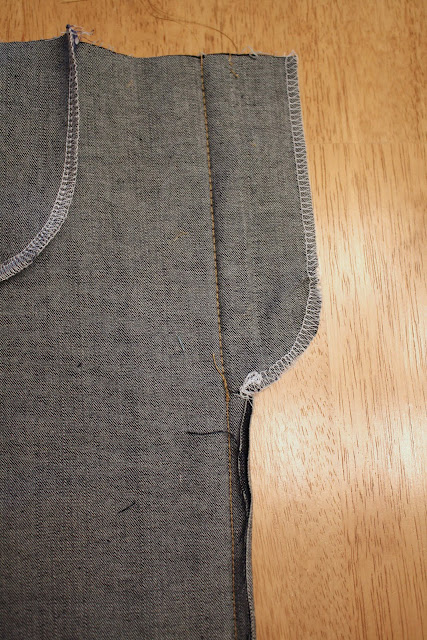 Open up the fly extensions and press 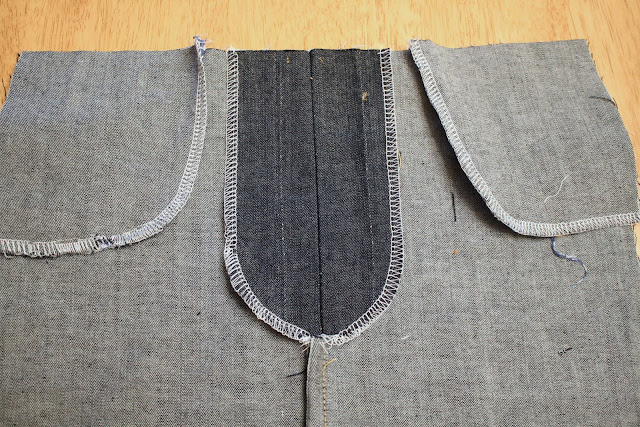 Now, fold the skirt so the right extension sticks out. Place the zipper on it face down, making sure the teeth of the zipper are to the right of the center seam. Stitch close the the teeth. 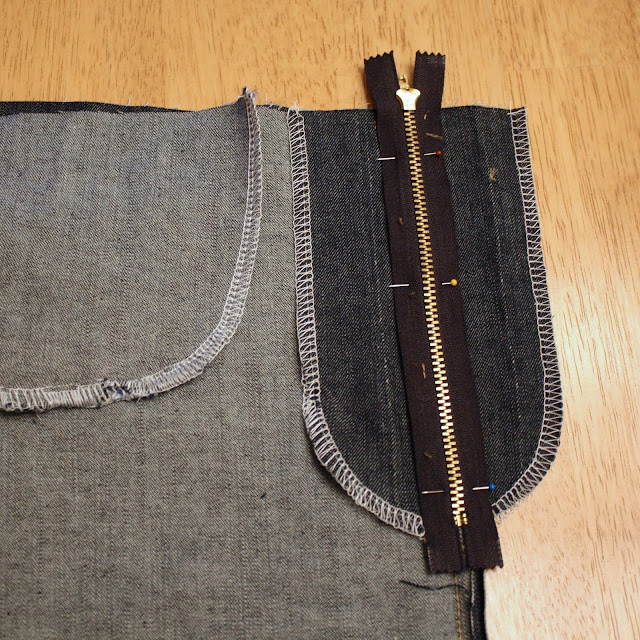 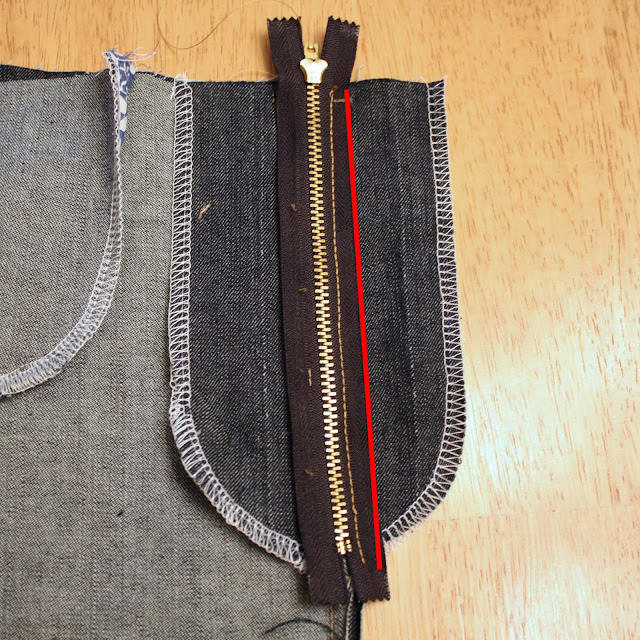 Now, fold the zipper and extension under like this 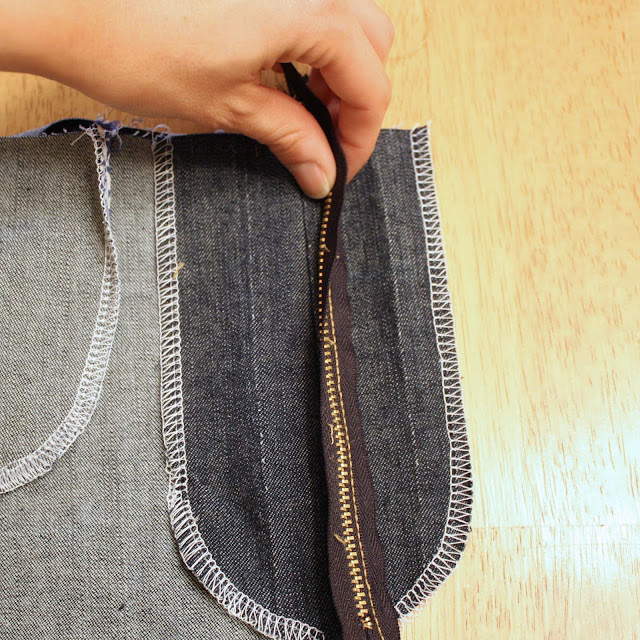 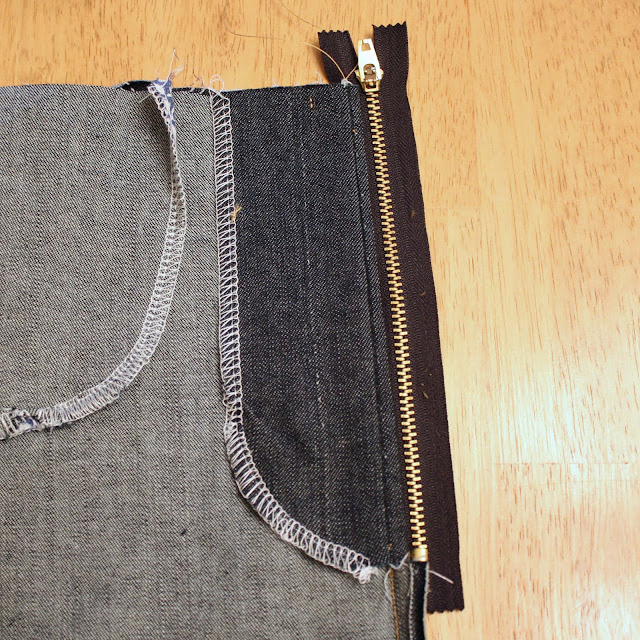 Now you need to make a fly shield for the inside of the skirt if you plan to use one, which I recommed, so you don’t have zipper teeth right against your belly. I just used the fly extension part of the pattern and traced it on the fold. And I technically did it wrong, the correct way would be for the opposite edge to be serged and the serged one to be the fold. But it works. 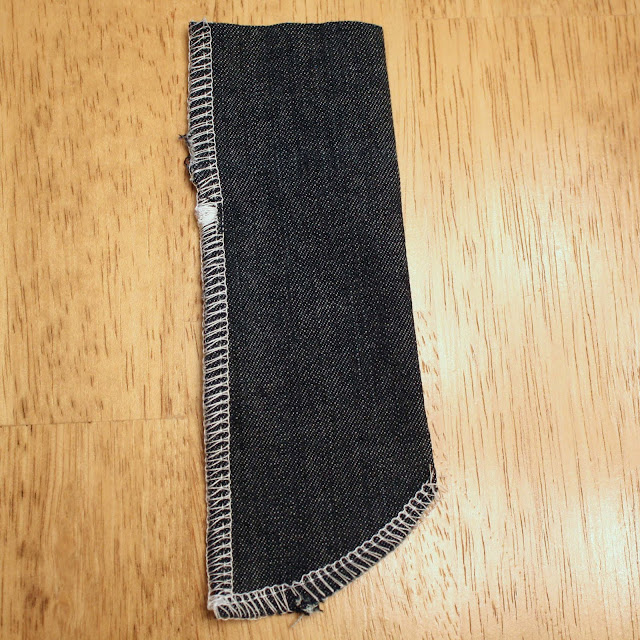 So you need to lay the fly shield under the zipper as you top stitch. You want the catch the long edge of the shield as you topstitch. And your topstitching should be between the teeth of the zipper and the center front seam, which is where the red line is on this close-up 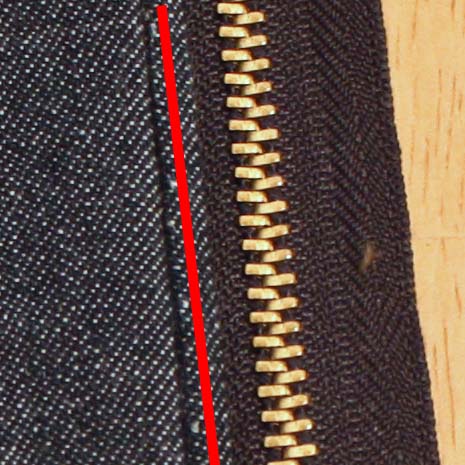 Now it should look like this. The fabric to the right of the zipper is the fly shield 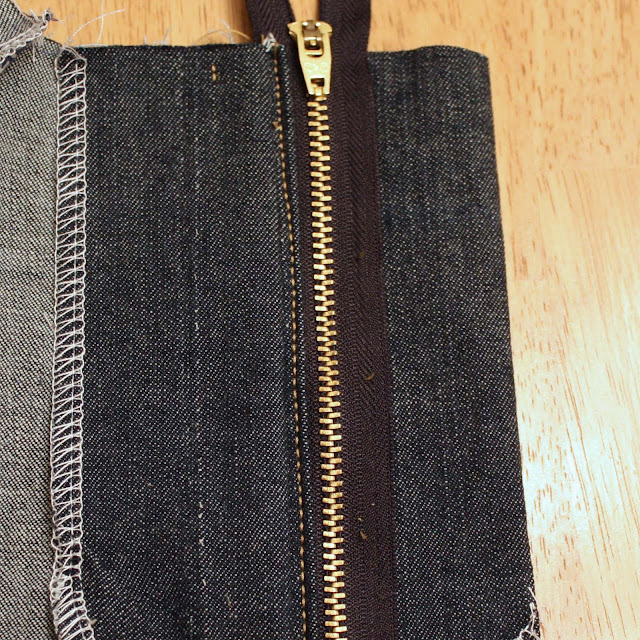 Turn the zipper onto the left side of the fly extension, right side down. Like this 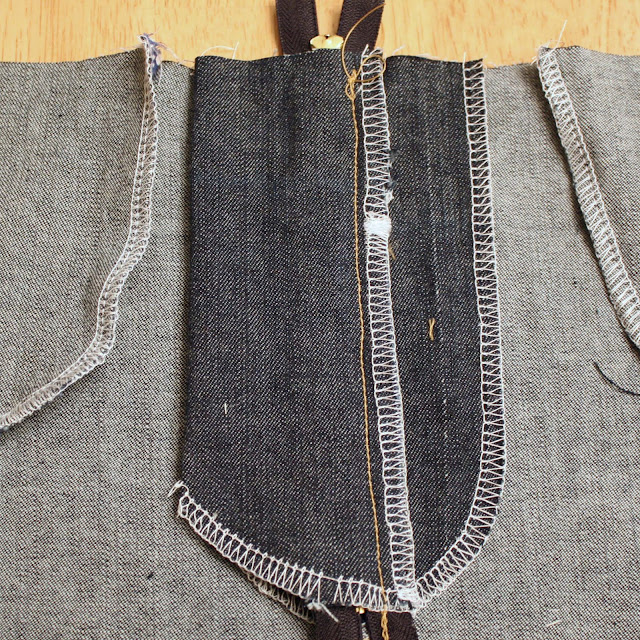 Pin the fly shield back out of the way 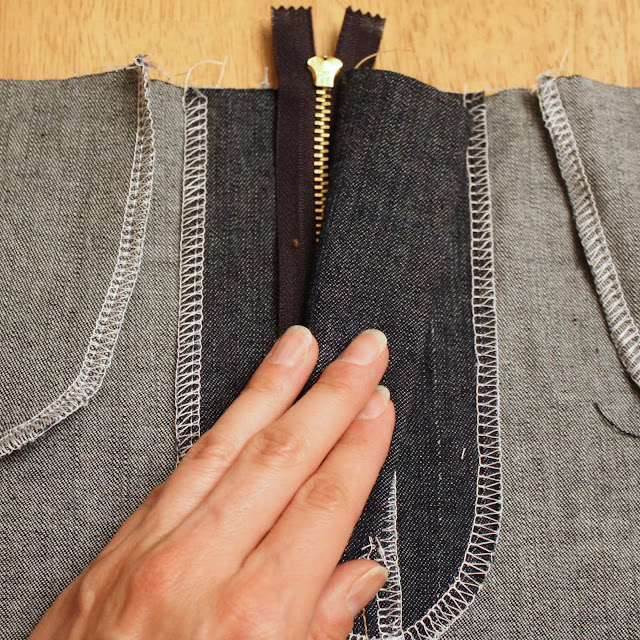 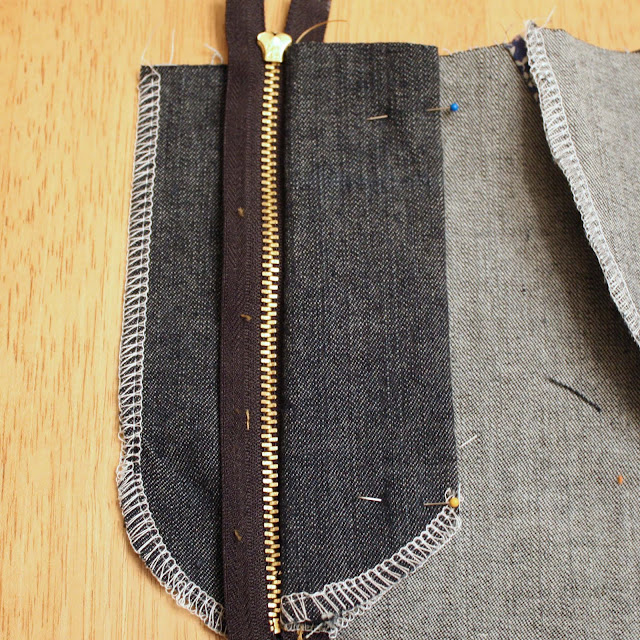 Now stitch close the the teeth, then open the skirt out and place it face up. Topstitch the curve of the fly extension into place, making sure not to catch the fly shield in this stitching. 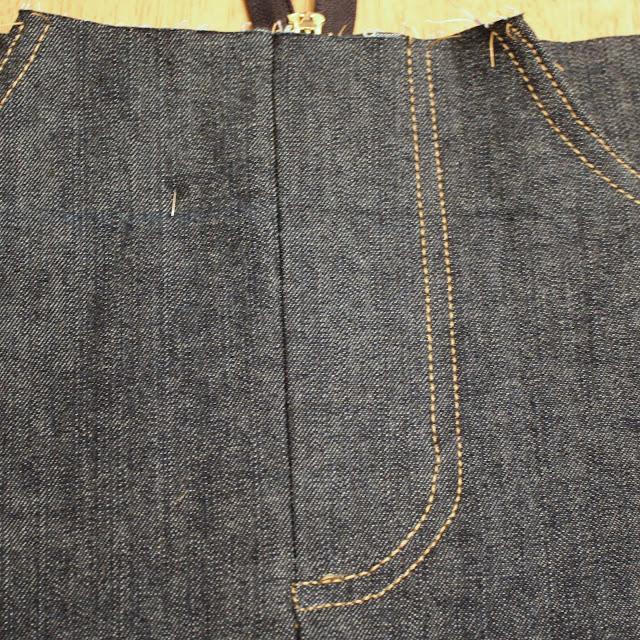 And now you have a fly front with a covered zipper. 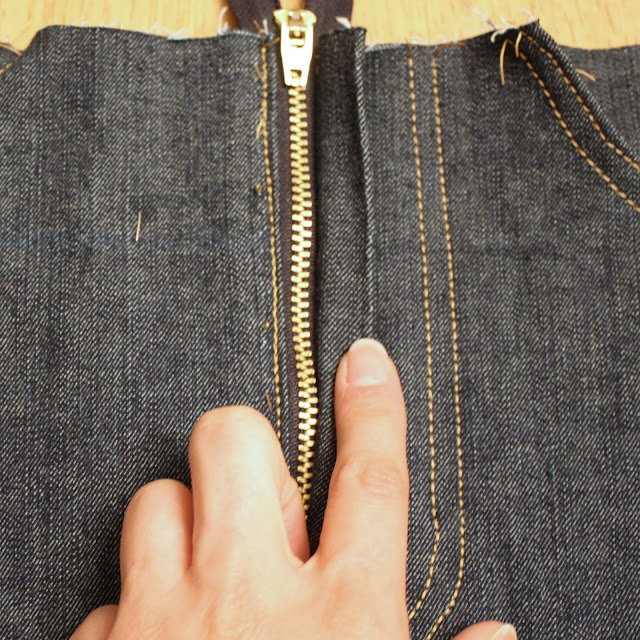 You can see I used a longer zipper than I needed. I cut the zipper between the teeth even with the top edge of my skirt. The more correct way to do it would be to cut off the bottom after sewing in a new stop by doing a very closely spaced zig zag across the new bottom. I don’t know why I did it this way, but it still works since this zipper has fairly big teeth that were far enough apart to get my scissors in between. If you do it my way, make sure not to zip the pull off the top of the zipper until you get something that will stop it. In my case it was the waistband.

To see how I made the full skirt, go to this tutorial

Prefer to watch video? Here’s one from my YouTube channel. If the video below isn’t working for some reason, you can also watch it here.

Previous Post: « Vintage Surfer Style Board Shorts Sewing Pattern for Vintage May
Next Post: Knock it Off – Snail T-Shirt Iron On »