This is also going to the little girl whose mom donated her stash to me. It’s a pattern I’ve been wanting to try based on a vintage Butterick 1950s dress pattern I made for myself. Since this particular little girl is on the skinny side, I love that her mom can customize the fit for her. And it’s fully reversible! 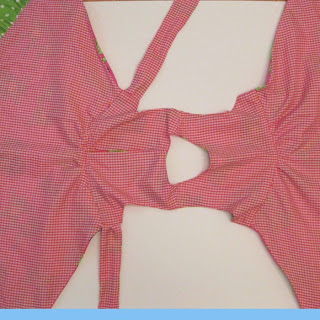 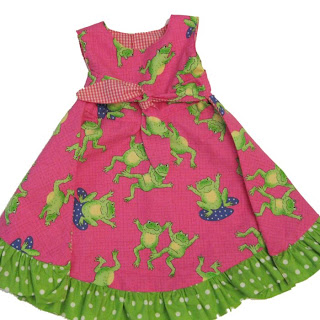 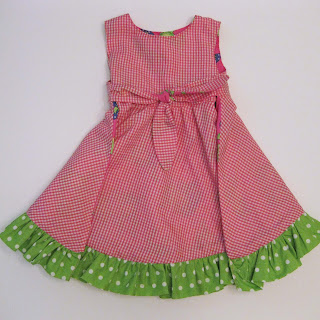 My own dress on which this one is based has no buttons, snaps or hardware whatsoever. But I had to add 3 snaps to this one because:
1. Babies heads are bigger in proportion to their shoulders than those of adults. And they still have skinny necks. So I had to add an overlap in the back and two snaps so Miss Girly can get her head through but the dress won’t fall off her shoulders.
2. Adults (well most of us, anyway) don’t spend a lot of time crawling (preschool teachers excepted). So I added a snap to the back of the skirt front bottom, otherwise the dress would just fall apart at the sides and leave her diaper uncovered.
And I must admit, in order to figure out #2, I had to try the dress on Bean. This was done with full knowledge of his father, and Hubby was not pleased about his boy crawling around in a pink dress. I, on the other hand, could not stop laughing, and neither could Bean, who thought playing peekaboo with the skirt was hysterical. But to show that I am not an entirely evil mother, I refrained from taking pictures and subjecting the boy to photographic evidence.